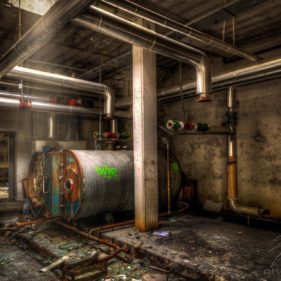 In the boiler room only two of the four boilers are still standing and slowly corroding with time. Many pipes and two boilers must have been stolen and sold for metal long time ago. 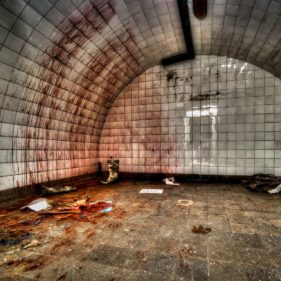 It looks bloody. It looks like the butchery – and it’s just in the far corner of the kitchen. Only little people still know what went on in there – and why the walls are still bloody red… 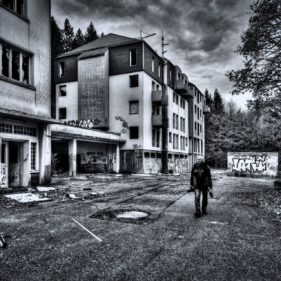 A friend from our photo group on his first UrbEx adventure in the Clinique Du Diable.

Just a year after my first visit to the Clinique I went back with some friends to see what changed – compared to my last visit there is even more damage caused by vandalism and thieves. The place got also rather crowded meanwhile: not only urban explorers but geocacher and groups with soft air- or paintball guns in army uniforms… And still: there were more rooms and corners to discover. 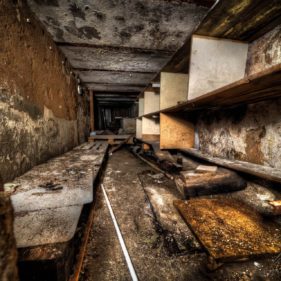 In the cellar of the main building we found this low tunnel. The end leads to some barricaded stairs and maybe an exit.
What the use for this tunnel was remains a secret. But one could think… the shelves are long enough for human bodies and at the beginning there is a small room with one table… 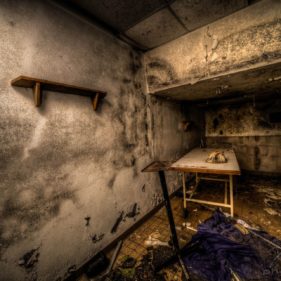 The first thought when I found this room was… Mortuary Chamber. Maybe because of the one table in there, deep in the basement… And maybe the tunnel with shelves that starts in the right corner of the room… 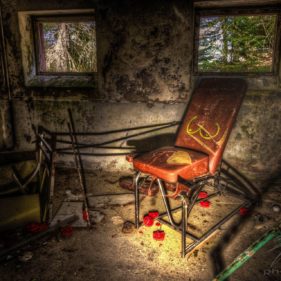 When power gets slowly replaced by rust and thieves take what once got driven by the electric motor… a lonely reminder poses in the small ventilation room. 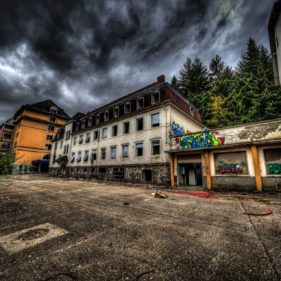 The Clinique Du Diable is a big complex with six buildings. This is the view from the front to the orange main building with some of the employees’ houses. Behind the main building, the pool is hidden and a bit up the hill the chief doctor’s villa… 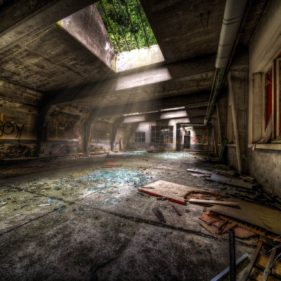 Once full with cars and trucks, there is only trash, scattered glass and sunshine left in the big garage. With the last employees the last cars must have left. 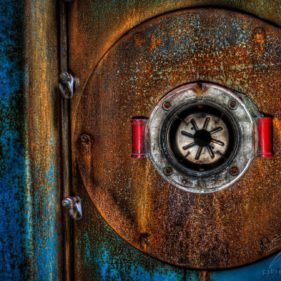 The rusty door of one of the remaining boilers in the heating room. Still some color is left but the door remains closed…