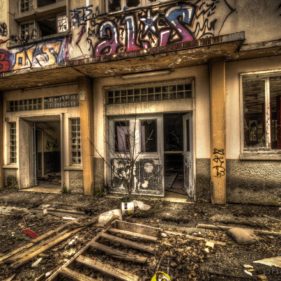 The entrances to the staff buildings and a leisure room with a forgotten child’s bicycle… With kids around it must have looked a bit more inviting than it does today. 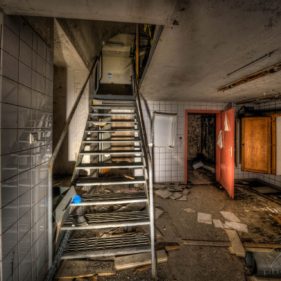 Underneath the big kitchen of the Clinique Du Diable this must have been the storage room. Now it’s empty – but it must have held a lot of non cooled food for this big complex while in use. 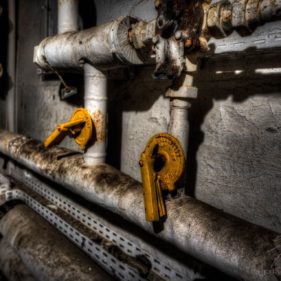 A lot of pipes run all through the basement across the buildings and up to the top floors. The valves as well as the pipes lost purpose and just remain relics with some color…

These Boots are made for… 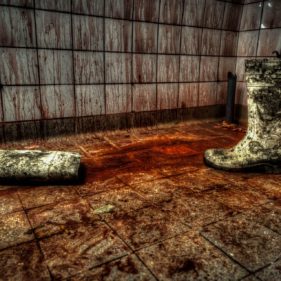 These Boots are made for…

However the boots got in to an empty room with (artificial – I assume) blood on the wall, one can only speculate. If someone left props from a photo shooting – or if there was something else going on? We won’t know… 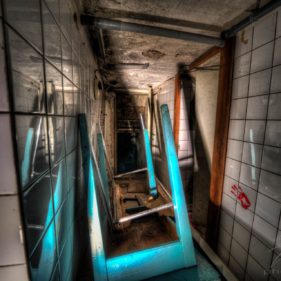 A barricaded corridor underneath the big kitchen in the Cinique du Diable. The furniture was most likely used once upon a time. But however it got here and where a red hand print on the wall comes from will stay a mystery…

In the Shadow of the Sun 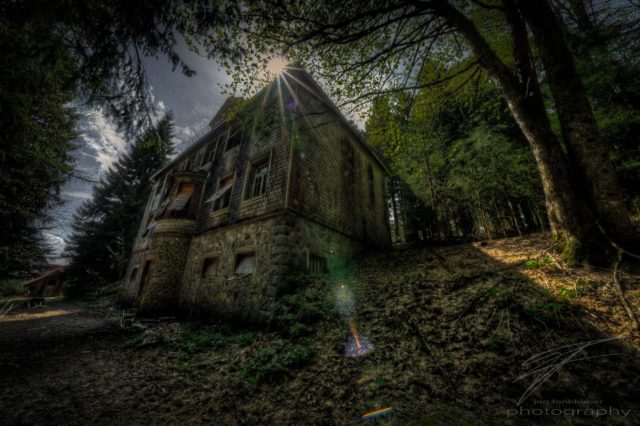 The chief doctor’s villa in the Clinique du Diable, France

The chief Doctor’s villa in the Clinique du Diable. The building is a bit up the hill, behind the main complex and hidden in the trees. It looks as creepy as some things we found in the cellar… 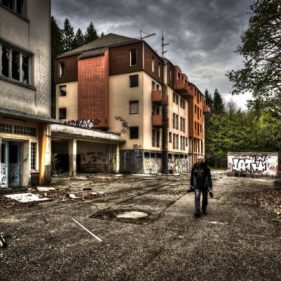 April 2018: The Clinique still stands. With some people from our photo group we went for an urban exploration to the Clinique. Compared my last visit there is even more damage caused by vandalism and thieves. The place got also rather crowded meanwhile: not only urban explorers but geocacher and groups with soft air- or paintball guns in army uniforms… And still: there were more rooms and corners to discover. So my pile of photos raised to over 400 GB and a lot of work has to be done with them… 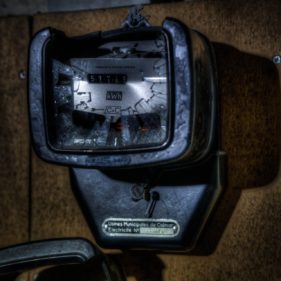 From the day it was mounted, this electricity meter counted day and night. Until the cables got cut and counting stopped forever. 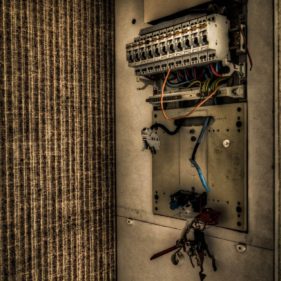 When business was running, each room needed power, every floor was flooded by artificial light during the dark hours of the nights. But that’s long gone. Only a few ripped off ends from wires and some electric appliance remember of the busy times. Thieves stole all the copper from the tubes and everything that looked like easy money. Everything in here is disconnected today. 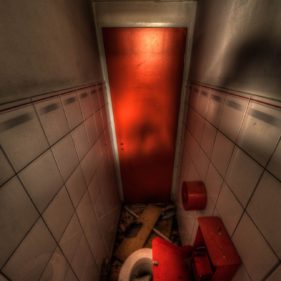 Most likely the door to this quiet place cannot be opened from the outside anymore. That must be the reason for it still has a decent condition. Funny story aside: I had no clue what could be in this room. So I held my camera blindly through the broken window until I heard a beep from the auto focus.