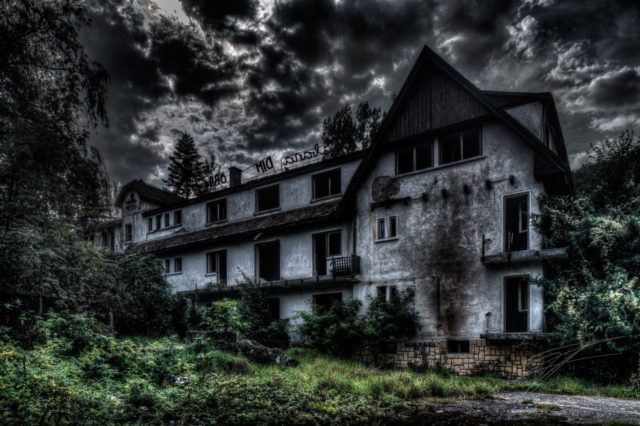 Just outside Braşov, Romania, on the way to the mountains, there is a hotel. Many years ago, the hotel got abandoned when the owner stopped to care about it. Since then, a process of decay slowly goes on. Close to a main road, it’s easy to find – and so did people from all around: one needed a bathtub, one a toilet… even door-frames and the smallest things are gone. They may still have an afterlife in a better maintained environment. Despite the ongoing decay, the hotel is still kind of used: some old beer bottles, here and there some clothes, a sleeping bag – homeless people stay in for the night.

The Cabana Dimbul Morii was one of Braşov’s most beloved stopovers, equally appreciated by both tourists and locals in the ’70s and’ 80s. The “cabana” was built in the first half of the last century. After coming to power, the communists nationalized it and it was administered by the Ministry of Internal Affairs. Years later, the building was released from the former Braşov Municipal Council and was managed by various tourist companies in Predeal. If you ask the locals – who lived there in the 1970s and 1980s – to tell you about some beautiful places in Sacele, frequented during that period, you will inevitably hear of Cabana Dimbul Morii. And you will hear beautiful stories about the time travelers spent there, the charm of the place and weekends with friends and family. There was a holiday atmosphere every summer and winter, people dining at the Cabana Dimbul Morii – an elegant place full of tourists. Increasing competition in the area, as well as the lack of flair and interest of the managers, have made business go from bad to worse. Once the inheritors claimed it, the business got abandoned in 2005 and never revived. The building was left on its own and to the forces of nature. The bottom line is that (surprisingly) the current owner regularly pays taxes, but ignores all the concerns regarding the precarious condition of the property and ignores all requests made by the mayor of Predeal. 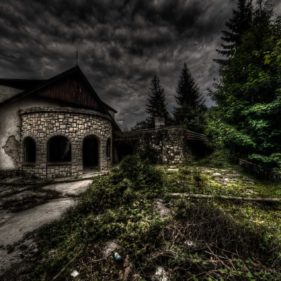 What you find today are the ruins of a former glorious hotel; still very impressive from the outside. Some tables in the garden and a beer would be an invitation to sit down and enjoy. However, it’s not too safe to enter the building: parts of the ceiling are hanging, some pieces of the upper floor broke down and reveal the view to the holes in the roof… All that’s left is an empty hull reminding of a place full of life and prestige. A sad reminder of the past. Due to the stage of decay, the upper floor is not accessible without getting in quite some danger: the wooden floor is unstable and already partially broken down. So at the end of the stairs, which are still stable, the exploration ends for most visitors (us included). But once you take a glance at it, you can still imagine a beautiful hotel with nice rooms – it must have been a delight back in the times.