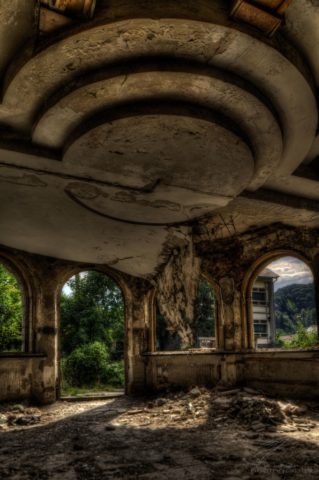 Circles – In the main hall of Cabana Dimbul Morii, Romania

Urban exploration – or in short: Urbex – is the exploration of man-made structures, usually abandoned buildings or not usually seen components of the man-made environment. If decay already started to take place, the environment starts to get even more interesting. Although urbexing may sometimes involve trespassing onto private property, this is not always the case.
Still, a lot of interesting places are fenced mostly to keep people away, due to third party liability: no owner wants to be held responsible for an accident which occurred on his property. But where there’s a fence, there is a hole in it.

So what’s with the fascination about the whole thing?
Once upon a time, the “object” was built for use, maybe for glory or maybe as a hospital or as a factory or… you know what I mean. And then, for some reasons, it got abandoned. As it always is after people stop taking care of their creations, a process of decay starts: the elements used to build something urban slowly degrade and try to decompose to their initial form: color washes out, wood rottens, walls resolve into rocks and sand. At the same time, nature shows its force and takes back piece by piece: some moss in a corner, a flower growing in the crack of a wall and green leaves sprouting from a rotten carpet…

These are the most fascinating places: simply left back for nature to take care of. Only the most valuable things get removed on the last day of use. What’s left behind are remains of old furniture and machines; maybe a shoe or some clothes, some dishes ready as if someone planned to be back soon…

Wired Poles – In an old industrial area outside Braşov, Romania

Take a moment and let the atmosphere carry your fantasy away to the days where people were here, work was done and life took place. This, I think, is a big part of the fascination about abandoned places. But of course it’s not the only one.
There is the mystery, the creepy dark corners and rooms, noises emerging from the wind and weather, strange smells lingering in the air. Light falls through a broken window or a hole in the roof. Countless details and impressions coming together to form a fascinating place.

And not to forget: the challenge to pack as many of the above impressions and moods into a picture! 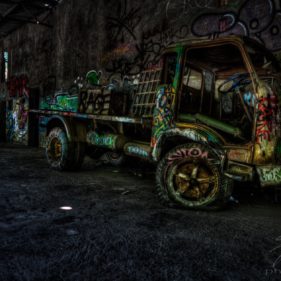 Sadly, more and more of these places (especially the “younger” ones) fall victim of vandals and thieves. Since even buildings still in use get sprayed and damaged during nighttime, an abandoned place is like an invitation for today’s bored youth. Empty beer cans laying around, broken bottles, graffiti on the walls, even fireplaces in some rooms. The meaningless destruction of everything left behind: windows get scattered, furniture thrown out and burned. And with today’s prices paid for scrap metal, everything that fits a car or a truck and that can be carried out is gone.

So, after all, these places not only give a view back to the past but they also draw a picture of today’s society. At least of some of its members.